For several weeks now, Caleb has been wanting to start eating real food. You could tell in the way he would open his mouth like a little bird if we were holding him while eating. That boy wanted food! Since we knew that we would be coming to my parents and they have not been able to witness a lot of his early accomplishments and milestones, we decided to hold off on giving him solids until we came down for a visit.

Not such a good choice for Mommy.

Since Caleb’s body was wanting more substantial food and was instead being give just milk, that meant that he needed MORE milk. Whew… I could barely keep up with the milk demand over the last few weeks. It seemed like every time I sat down, I had something attached to me, trying to produce the 20+ oz that he would eat in a day’s time. Yeah… that kid would eat 20 oz just while I was at work and there was no telling how much he got while I was at home.

After talking to Mom and Dad, we decided that he first meal should be the tried-and-true standard of Gerber Rice Cereal. I don’t know if the brand had anything to do with it, that’s just the one that Dad picked out when we sent him to the store. On that note, it’s a miracle he came home with baby rice cereal and not Rice Krispy Treats!

You wives out there know what I’m talking about!

Saturday night we sat down to feed the boy his first real meal. Over the last few weeks, we had been slowly introducing the spoon to Caleb, allowing him to feel the texture of it, and then giving him his milk or a little bit of water so he could get used to feeling something other than Mommy or fingers in his mouth. If you remember the video that I posted about a week back showing Caleb drinking for a spoon, you’ll remember that he took right to it!

So how did his first experience eating real food go?

Amazing! That kid loved loved loved the cereal and was ready to stick his entire face into the bowl! (Apparently when Micah went back a little later to give him some more, Caleb stuck his whole foot in the bowl. Yeah, smart kid.) Mom and Dad loved being a part of such a big milestone and Mommy and Daddy were so proud of their boy. The uncles thought it was pretty cool, too. Messy, but cool.

Ready for the video? Of course, there’s a video, what would be a milestone without a video???

My favorite picture of the night. That is a face of pure bliss! 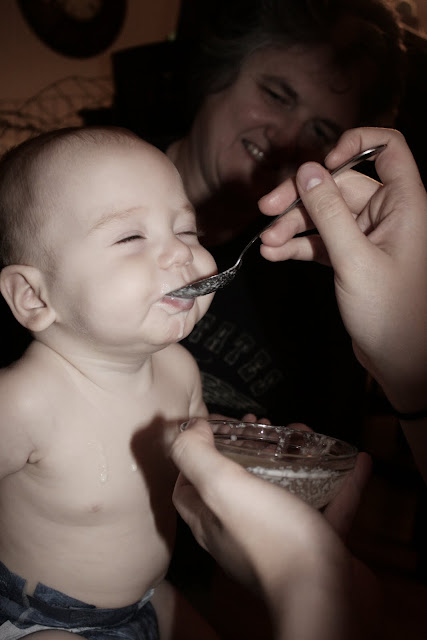 He looks so big in this picture. Not really like “Caleb” at all, but it still warms my heart. 🙂 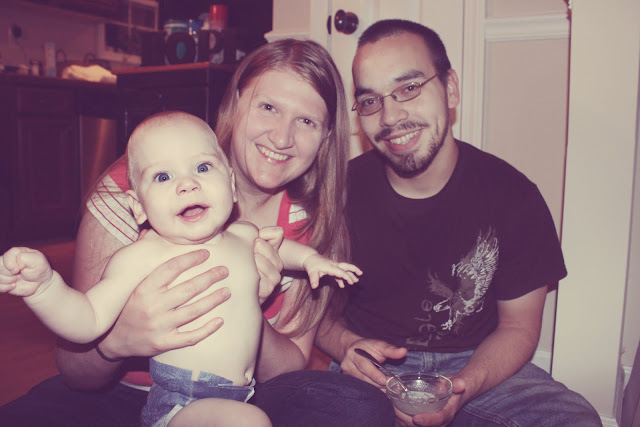 Now, care to share some advice? How often should he be fed solids? Daily? If so, how many times a day? How long should I keep him on cereals? Any helpful hints? Thanks in advance!

Happy Easter from the Peter Family

Cuteness? You can’t HANDLE the cuteness!